So, what exactly are rain shower heads? They are a large style of shower head, that have been designed to mimic the effect of getting caught in a torrential downpour, which if they weren’t so cold most of the time, would actually be quite enjoyable. If you are looking for a way to make you shower an altogether more relaxing experience, then installing a rain shower head is a great way to start, and doesn’t have to be an expensive project either. Depending on whether you have a fixed shower head or a hand held shower head, you will find there are many different styles of rain shower heads to choose from, allowing you to choose the one you feel will suit your bathroom best. Of course, the bigger the shower head, the greater the feeling of being caught in a rain storm will be, and as this is the whole idea of these kinds of shower heads, generally speaking, the bigger shower head you can get, the better.

These shower heads come in a range of styles from traditional to ultra modern. When making a choice always try to match the different elements in your bathroom design for example match chrome shower doors with a chrome shower head and chrome taps – if brass, match all in brass. Keeping the theme will have better results.

Because all shower fittings are universal, you won’t have to worry about your rain shower head connecting properly to your existing shower hose or faucet. Although if you are choosing a very large style shower head, it is worth double checking that your shower riser will be able to withstand the weight properly. Your only concerns when choosing your new shower head will be the style and size, ensuring you get the best shower experience from your rainfall shower head as is possible. 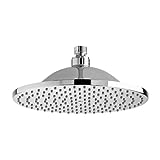 The Evolution of the Modern Bath Tub and Shower Combo

A Walk In Tub Shower Combo for Ease and Comfort

The Evolution of the Modern Bath Tub and Shower Combo

A Walk In Tub Shower Combo for Ease and Comfort